West Norse and East Norse Manuscripts in the Digital Age: Short Report of An On-Going Discussion

Is there a common solution for editing of West Norse and East Norse manuscripts in the digital age? How do digital repositories impact public and scholarly engagement with manuscript material online? Do current mainstream approaches to digitalisation and digital cataloguing necessarily aid researchers to attain innovative and, most importantly, valid and well-grounded results?

These were some of the questions that were discussed at the seminar “Northern Europe 1200-1500 CE: West Norse and East Norse Manuscripts in the Digital Age” dedicated to digitisation and digital editing of Norse manuscripts as well as current research into this material. The seminar organised and hosted by the TextWorlds network at Uppsala University has gathered infrastructure professionals working with electronic editing software, digital cataloguing and repositories, namely MenotaBlitz.html, Manuscripta.se and Alvin, as well as early career researchers, see the list below, that have used these and other similar infrastructures in their finished and ongoing projects. The initial round of infrastructure and current research talks was followed by a prolonged Q&A slot and a panel discussion of future developments in the field of digital philology in Scandinavia as well as major obstacles on the way there.

One of the principal challenges that was addressed relates to current mainstream practices of digitisation and digital cataloguing. It is often the case that outdated analogue materials including catalogues are turned digital without any considerable revisions which in the long run will significantly hamper the development of digital philology. Reproduction of data errors and uncertainties of other kinds undermines the use of “big data” approaches and digital methods as it is extremely difficult to obtain reliable results. Moreover, the agendas and research questions underlying older analogue catalogues are in many cases different from those shaping current research into West and East Norse manuscript material. For instance, nineteenth-century philologists were preoccupied with studies of “high-status” medieval texts and manuscripts such as Codex Regius of the Poetic Edda or Reykjavík, Stofnun Árna Magnússonar í íslenskum fræðum, GKS 2365 4to. Much less attention was paid to “marginalised” works of post-medieval manuscript tradition, which becomes evident in the catalogue practices of the time. This principal premise is challenged today since more and more previously neglected West Norse medieval and post-medieval sagas and other materials gain scholarly attention.

In order to improve the quality of available catalogues and other manuscript datasets as well as to ensure constant growth of born-digital data, it is necessary to build a strong, multisectoral community and implement a collaborative approach to building, improving and sustaining manuscript and cultural heritage infrastructures. Ideally, such a community will be able to inform the funding bodies in charge of investments into digital cultural heritage about the issues outlined above and place adequate cataloguing higher up on their agenda.

Kapitan, Katarzyna Anna (2021b). “Perspectives on Digital Catalogs and Textual Networks of Old Norse literature.” Manuscript Studies: A Journal of the Schoenberg Institute for Manuscript Studies 6:1 (will appear in Gold Open Access in May 2021).

Much of digital humanities research is highly data intensive. Especially in historical research, using and combining legacy data from a broad array of different sources is a key to getting enough data to work with. The importance of knowing what the data is has been acknowledge for some time already and there has been a lot of work done to develop schemes for describing data i.e. producing metadata. As the documentation of data has generally improved — albeit not always and everywhere — it has become increasingly apparent that knowing what data is, is not really enough. It is equally important to know how the data came about.

You can imagine that you are having a data file with height measurements of walls ranging from 1.09 meters to 4.6 meters. Even if the file looks meticulously compiled, without knowing how the measurements were taken, the data is not especially informative. Are the heights average heights or maximum heights, were they measured by a tape or by some other means, were they measured by only one of several individuals, what was the purpose of the measurements and so on. All of this has an impact on what the data is and how it can be used in the future.

A new research project based at the Deparment of ALM, CApturing Paradata for documenTing data creation and Use for the REsearch of the future (CAPTURE) will investigate the particular problem of what researchers need to know about the making and using of data  and how it would be possible to capture enough of that information in order to make the data usable in the future. In contrast to metadata that describes data, the data about the processes relating to data is usually denoted as paradata. The major problem with capturing paradata is in the practical impossibility to document and keep everything and the difficulty to determine how to capture just enough.

The empirical focus of CAPTURE is archaeological and cultural heritage data, which stands out by its extreme heterogeneity and rapid accumulation due to the scale of ongoing development-led archaeological fieldwork. Within and beyond this specific context, CAPTURE develops an in-depth understanding of how paradata is being created and used today, elicits methods for capturing paradata, tests new methods in field trials, and synthesises the findings in a reference model to inform the capturing of paradata and enabling data-intensive research using heterogeneous research data stemming from diverse origins.

The principal investigator of CAPTURE is professor Isto Huvila at the Department of ALM. This project is funded by the European Research Council (ERC) under the European Union’s Horizon 2020 research and innovation programme grant agreement No 818210. 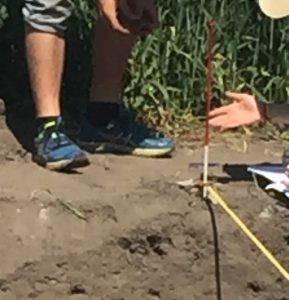 Isto Huvila is Professor in Information Studies at the Department of Archives, Libraries, and Museums at Uppsala University.  Professor Huvila’s  research interests include information and knowledge management, information work, knowledge organisation, documentation, and social and participatory information practices. The contexts of his research ranges from archaeology and cultural heritage, archives, libraries and museums to health information and e-health, social media, virtual worlds and corporate and public organisations.  For more info, please see here.

About the DH blog

An outlet for new ideas, research presentations and other outputs from the Digital Humanities Uppsala research network.

Read more about DH Uppsala at our web page.